Thankful in Lithuania in 1991

The first official Thanksgiving celebrated in Lithuania was back in November 1991.

After the collapse of the 1991 August Coup led by Soviet hardliners, Lithuania had finally achieved its independence from the USSR after 50 years of Soviet occupation and had begun the road of integration into the modern world and family of European nations. Foreign diplomats arrived each week in Vilnius to renew their diplomatic ties with the new Republic of Lithuania. The American Ambassador, Darryl Johnson, had presented his credentials to Vytautas Landsbergis and begun preparations to set up the new American Embassy in Lithuania.

The American Embassy was not officially opened until January 1992, when U.S. Vice President Quayle arrived and cut the ribbon at the embassy’s official opening ceremonmy. As an employee of the Lithuanian Parliament’s Press Office, my job was to wrangle the hundreds of journalists who covered the historic event–and they needed a lot of wrangling! Journalists can get out of control while trying to cover a story. In those extraordinary days, each day presented something new for the history books. After 50 years of Moscow denying Lithuanian history, we happily welcomed the press to document the emergence of a new democratic nation. 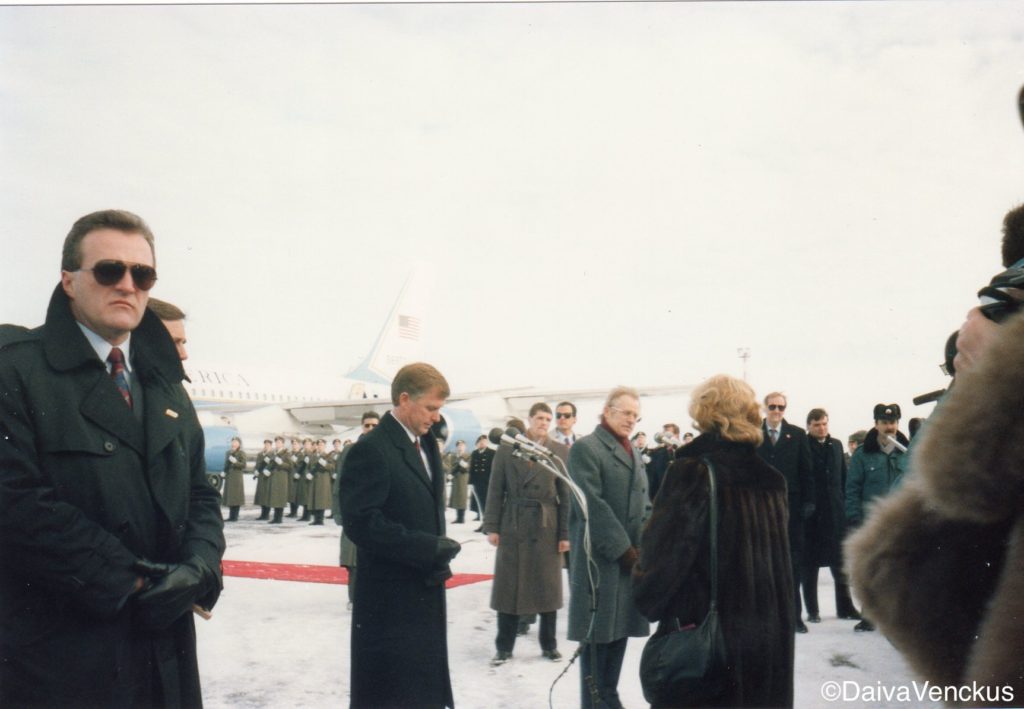 U.S. Vice President Dan Quayle arrived in Vilnius in January 1992 to sign diplomatic treaties with Lithuania and to officially open the American Embassy in Vilnius. Since I was serving as the head press wrangler, I had “all-access” so that I could check in with the US Secret Service to ok press locations for photo ops, etc – in case something changed from the plan. That guy with the glasses looks serious, but he was quite nice. Yes, they let me get close to Mr. Quayle. I have to admit, that was a pretty fun gig. 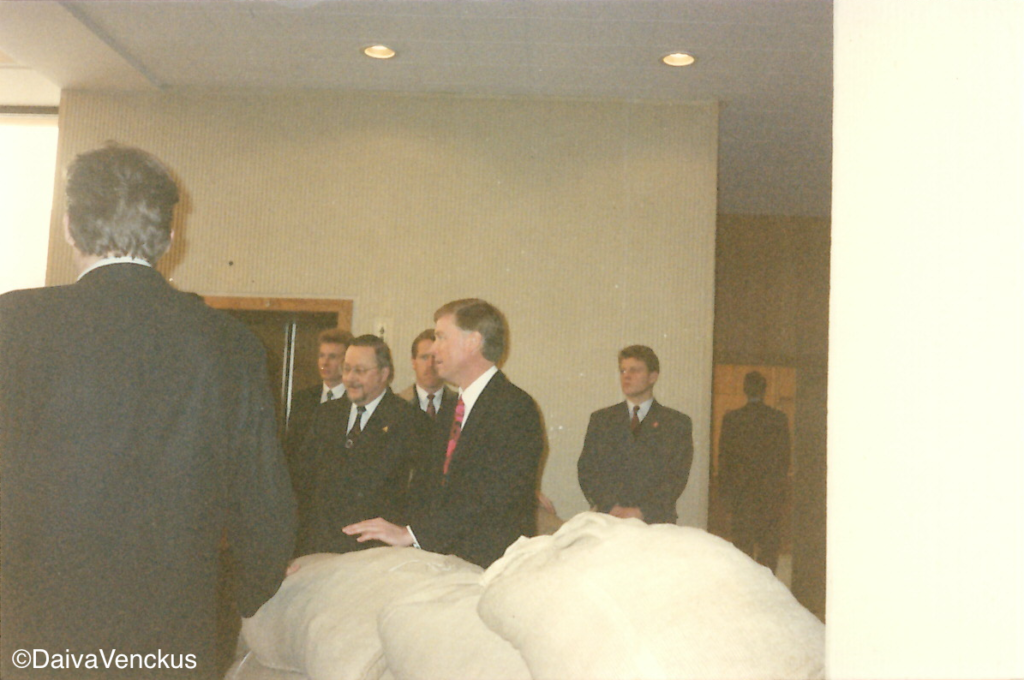 VP Dan Quayle arrives at Parliament to meet with Landsbergis, and the photo op by the sandbags outside his office. 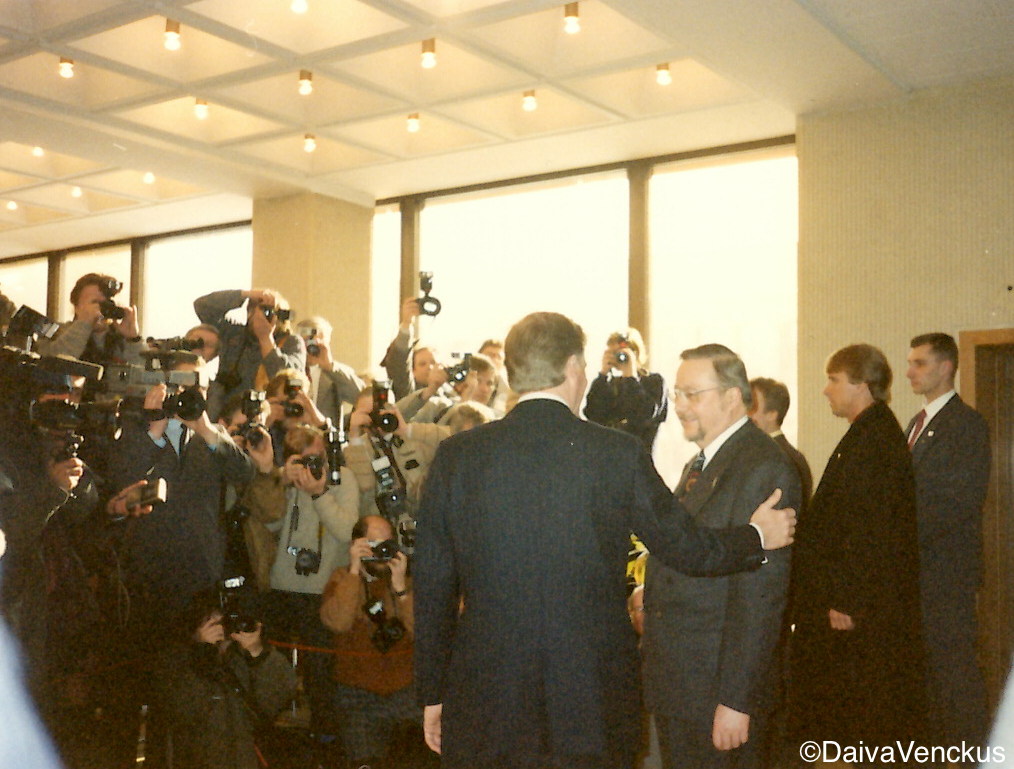 The swarm of journalists for the official state visit of US VP Quayle, who meets with Landsbergis 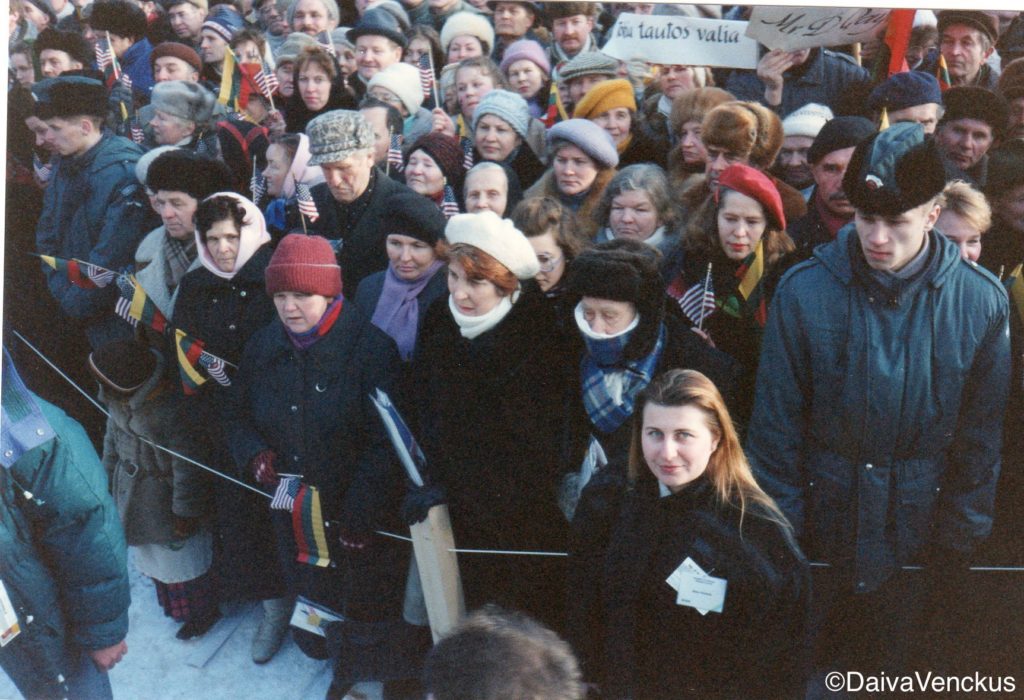 Wrangling the Press for US VP Dan Quayle’s official visit to Lithuania. At Independence Square waiting for Quayle’s speech with 100,000 citizens behind me.

In November of 1991, although the embassy was not yet open for business, U.S. Ambassador Johnson invited the American ex-pats in Lithuania, such as myself, for a  traditional Thanksgiving dinner. They were all well-known to me, since we all experienced the crazy, unbelievable year together.

The name, Rita Dapkutė, is familiar with most Lithuanians. She arrived from Chicago to Lithuania in January of 1990, worked for Sajūdis during the elections to Parliament. In March of 1990, when Landsbergis and the other Sajūdis candidates won the majority of the seats to Parliament, she established the Press Office (InfoBureau).  When Soviet tanks massacred unarmed citizens at the Vilnius TV tower and threatened the Parliament building on January 13, 1991, she remained inside the InfoBureau on the line with the US State Department and foreign journalists as bullets echoed across the horizon to report the facts before the Kremlin could silence them all. Another American was also helping in the InfoBureau during January 13th to get the news out to the world: Linas Muliolis from Cleveland. There were other young American Lithuanians also worked at parliament prior to January and continued to help stateside. Aidas Palubinskas. Edis Tuskenis. Darius Sužeidelis.

Rita was witness to and reported every single historic moment of the birth of the new Republic of Lithuania. Because of Rita’s efforts, Landsbergis and Lithuanian independence were not silenced and reported widely.

My godmother, Dr. Liucija Baškauskas and her family moved from Los Angeles to Kaunas in the fall of 1990. Liucija was a rector at the newly re-established Vytautas Magunus University with another Angeleno, Dr. Algis Avižienis. In the days after January 13th, 1991, Liucija helped the Kaunas TV station, which came online minutes after Soviet soldiers seized the Vilnius TV tower and station, to broadcast the truth about Moscow’s attempted coup and the courage of the Lithuanian people. The transmissions were seen in Poland, Norway and Sweden. The Kaunas tv station was successful in smuggling out video footage of Moscow’s crimes during the January 13th events to the West, which were featured in foreign broadcasts. Her daughter who had a graduate degree in international relations, Justina, arrived weeks later and worked in Prime Minister Vagnorius’ office while the Lithuanian Government worked to restore diplomatic relations with the world.

Another Los Angeles neighbor, Vijolė Arbas, had moved to Kaunas in 1990 to serve as a lecturer at Vytautas Magnus University. Other young Americans were also serving as educators at the University: Chicagoans Rita Stukas and Vida Pocius, and brothers from New Hampshire, Linas and Darius Kalvaitis. As the daughter of the famous poet Alė Rūta (Rūta Arbas) who wrote passionately about her beloved Lithuania and was an anti-Soviet activist while living in the USA, Vijolė stood outside of the Lithuanian Parliament building on January 13th with the crowd, protecting it from Soviet tanks. Another American from Minnesota who also helped at the University, Rasa Tautvydas, stood with her. Unarmed citizens repelled the tanks that night and preserved independence with nothing but their patriotic songs.

The summer of 1991 also saw the arrival of a lifelong Los Angeles friend, Auris Jarašiunas, who served as an intern at parliament. Chicago-native, Darius Šilas, arrived in Lithuania in July of 1991 and worked for Landsbergis as a translator and editor as well as handled his correspondence. And he was my roommate. During the 1991 August Coup, Darius helped remove historical Parliament documents out of the building to hide and  preserve Lithuanian history just in case the hardliner coup succeeded and the Kremlin would try to erase Lithuania from the world once again. After the failed August coup, he worked on the many historical documents reestablishing Lithuania as a member of the world of nations, such as the application to the United Nations.

Another Chicago-native, Jonas Ruikis and his girlfriend Marcella arrived in the weeks after the failed August Coup to volunteer to work at Parliament. As a computer engineer, Jonas arrived in time to help modernize the democratic process at Parliament, as the US government was about to donate old computers to Lithuania. More Americans were arriving in the country to help in the following weeks.

None of these individuals did this work for money or career aspirations. All simply had a fire within that compelled them to come to Lithuania to help any way possible, at the most dangerous and pivotal time in Lithuania’s struggle for freedom.

When we arrived at the temporary U.S. embassy, we were sent into the kitchen to work. This was not a fancy-schmancy embassy party. The embassy had not yet hired a staff and didn’t have much by way of supplies, like cooking utensils, so we all pitched in to cook in the kitchen and put together our meal–just like a typical family would.

Mr. Johnson had a turkey and pumpkin pie flown in, especially for our dinner among other traditional ingredients unavailable at the time in Lithuania. (Thanks U.S. taxpayers!) We enjoyed a hearty meal and went around the table expressing what we were grateful for. All the ex-pats were grateful to be American-Lithuanians, and of all things, to be in Lithuania to witness what every Lithuanian around the world had dreamed about for 50 years: freedom and independence. And we were excited to continue to work towards helping Lithuania build a new democratic nation. Not to mention, after the months of food shortages, we were grateful for the turkey, for American comfort food, and plenty of it! After our meal, we were back in the kitchen doing the dishes. 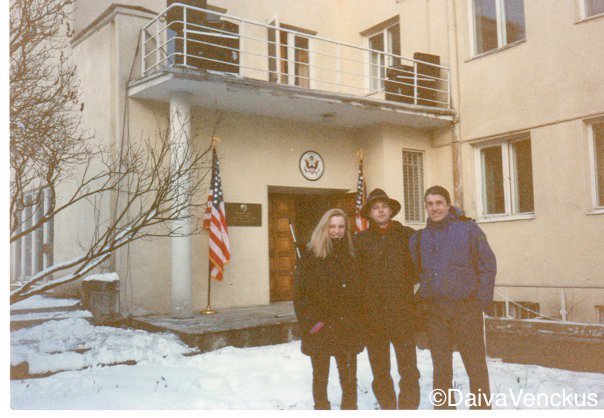 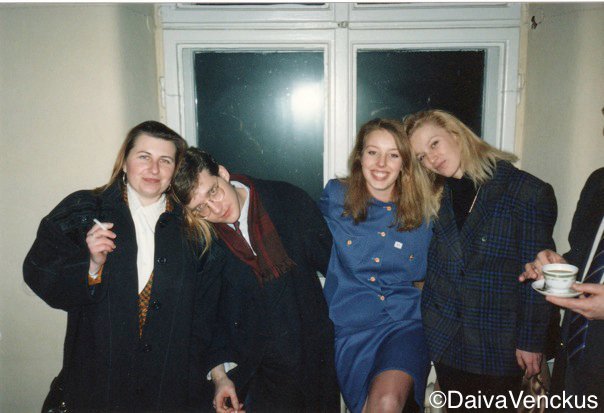 Me with Darius Šilas, Justina Baškauskas and Marcella at the US Embassy in Vilnius to celebrate Thanksgiving.

The first official Thanksgiving was not a glamourous event. That came a year later as would many others. However, another significant event occurred, equal in importance to independence itself. In November of 1992, Lithuanians continued to have much to be grateful for: The new Lithuanian Constitution was ratified, guaranteeing freedoms and the democratic Republic of Lithuania of the present.

As an American, when I think of the constitution, the famous images of George Washington standing over a table with the American constitution comes to mind. 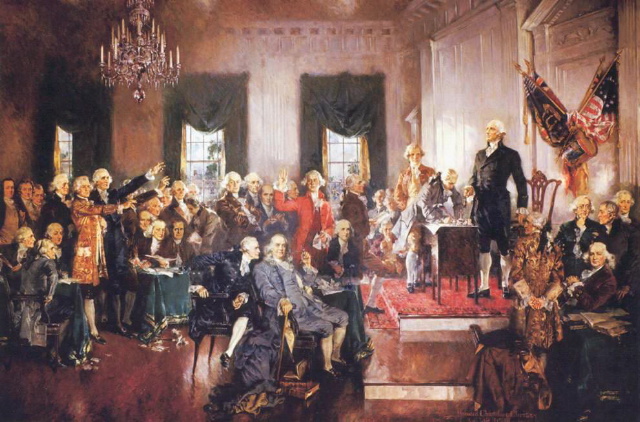 Born in and growing up in the USA, my history classes taught us how the French influenced in this idea of the modern democratic republic and the declaration of human rights for man, and the American revolution perfected the idea. What my history classes didn’t teach us, was that another nation also ratified a constitution similar to the American one in the same time period, in 1791. That country was Lithuania.

At the time, the Polish-Lithuanian Commonwealth was in a state of decline from the constant threat of more powerful neighbors and internal political conflicts. To strengthen the nation, they ratified a constitution in 1791 based on the separation of powers between the legislative, judicial and executive branches of government–very much like the US Constitution. But it was short-lived. 19 months later, after a war with Russia, the Commonwealth was partitioned and annexed by Russia, Austria and Prussia. The struggle for independence would wage on for two more centuries.

On November 6, 1992, on the third floor of the Parliament building where we held our press briefings, Vytautas Landsbergis, surrounded by Parliamentarians, signed the Lithuanian Constitution into force. The Constitution had received approval from Lithuanian citizens in a referendum held on October 25, 1992 (by 75% of those who voted).

I stood up against the wall among my Parliament co-workers to witness the historic event–and I couldn’t stop thinking that I was in the same room as the George Washingtons, Benjamin Franklins and Thomas Jeffersons of Lithuania. Sure, these are American mythological super heroes, and the individuals in the room that day in Vilnius were just representative of the regular men and women who happened to stand up to the Moscow Bear and lead Lithuania to freedom. They were my real-life heroes – the inspiring  example of the true power of the people.

I mentioned the many Americans who were in Lithuania during 1991, but the how do I name the over 3 million Lithuanian citizens who experienced the Soviet occupation and never gave up hope for freedom and risked everything to to support Sajūdis and Lithuanian independence? 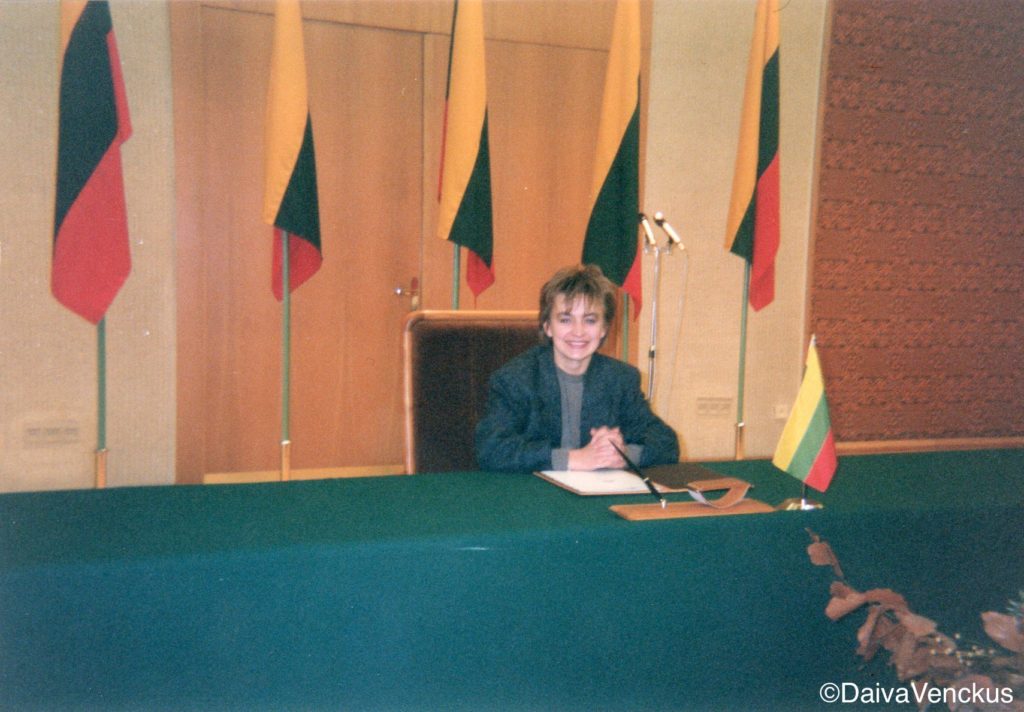 This is not Vytautas Landsbergis signing the Lithuanian Constitution. This is my co-worker, Snieguole Ziukaite, sitting before the actual constitution where Landsbergis would sit an hour later to sign. While we were waiting for Landsbergis and the rest of the the deputies to show up, and we got the journalists in place for the upcoming photo-ops, I talked Snieguole into sitting there while I snapped a quick photo. She didn’t want to do it, but I could be persuasive. 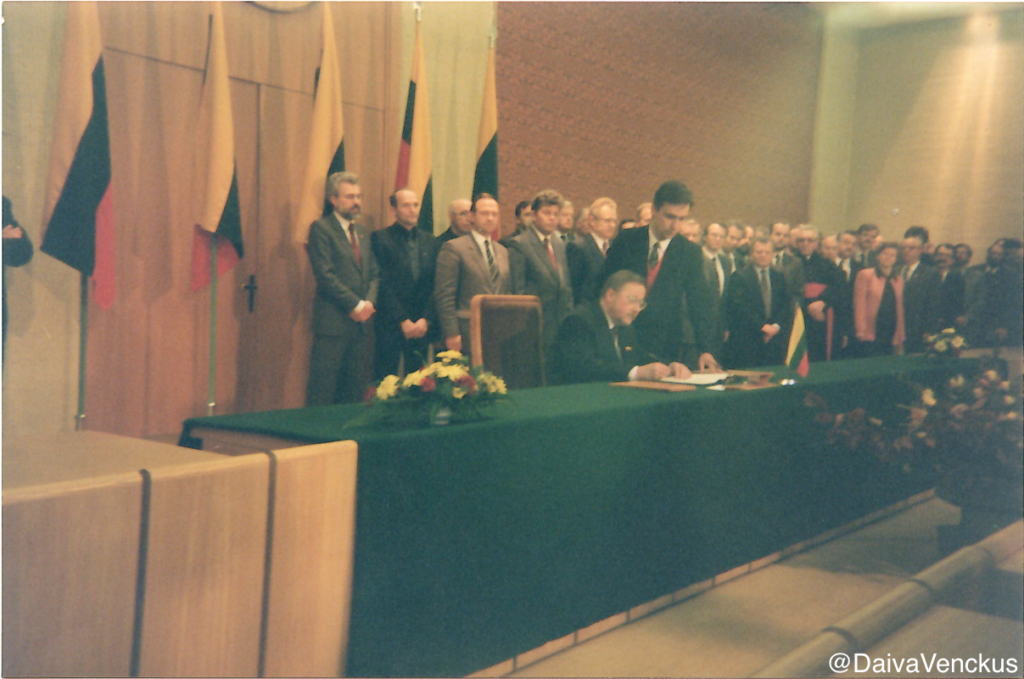 This is Vytautas Landsbergis signing the Lithuanian Constitution in 1992.

When we think of American history, we revere the famous names and thank them for our freedoms, but what about the unsung heroes? Their secretaries? Their organizers? The journalists? The unknown American soldiers who died so that Washington, Franklin and Jefferson could be idolized for their contribution to the American constitution?

We all can be grateful because we all made it happen. And to those who feel they may have missed out on those events of the past, know that there is still time to support Lithuania. What and who you support today, no matter where you are in the world,  will affect Lithuania’s future.

Show gratitude by preserving the traditions and learning your history. The holiday season is a wonderful time for family gatherings. During your American Thanksgiving dinner, you can to ask your family to tell their stories about their lives and their experiences participating in the fight for Lithuanian freedom. Each story matters, no matter how insignificant it may seem, because each effort contributed in some way to the story of Lithuanian independence.

It is our responsibility to keep Lithuanian history alive and preserved for future generations. And history is still being written…